According to CPI data; the highest monthly increase was 11.41 percent in furnishing and household equipment followed by;
- for transportation with 9.15 percent
- for miscellaneous goods and services with 7.42 percent
- for recreation and culture with 6.62 percent
- for food and non-alcoholic beverages with 6.40 percent.

The highest annual increase according to TurkStat; was 37.28 percent  in furnishing and household equipment followed by;
- transportation with 36.61 percent,
- miscellaneous goods and services with 30.61 percent,
- food and non-alcoholic beverages with 27.70 percent
- housing with 21.84 percent were the other main groups where high annual increases realized.

“The highest rates of monthly increase in Domestic Producer Price Index (D-PPI) by sub divisions of industry were index for electricity,gas  products by 40.21 percent, for crude petroleum and natural gas by 16.95 percent, for chemicals and chemical products by 13.74 percent.
“According to main industrial groupings classification in September 2018, the highest rate of monthly and annual increases were in energy.” (Graph) 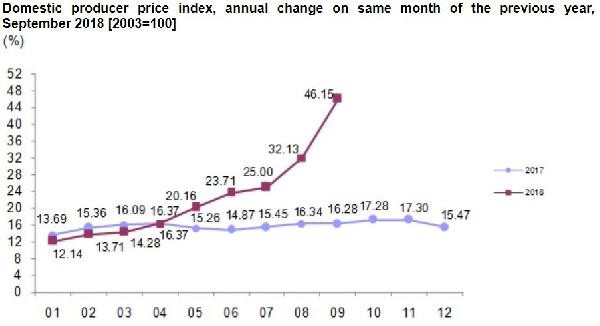