US officials say Turkey is clear that its operations in Syria target Daesh while in northern Iraq its focus are camps, PKK 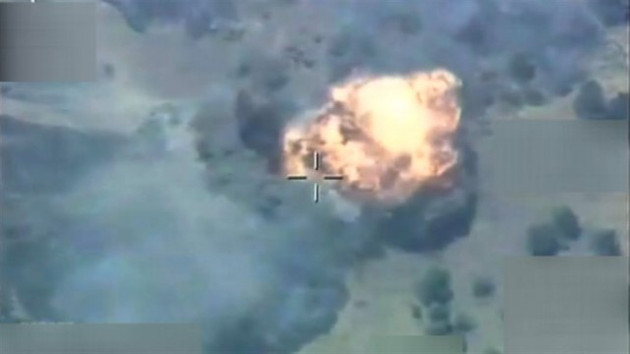 Turkey's recent attacks on the outlawed Kurdistan Workers' Party (PKK) in the Qandil Mountains of northern Iraq was in response only to PKK attacks in several parts of Turkey, U.S. officials said Tuesday.

"Our effort is to defeat Daesh, and that’s a goal that we share with Turkey," he said.

The three officials from different U.S. agencies spoke on condition of anonymity during a background telephone conference call about anti-Daesh coalition efforts and said Turkey would not have launched attacks if the PKK had not recently attacked the NATO ally.

Turning to the situation in Syria, the officials said the Syrian Democratic Union Party (PYD) was clear about its political agenda and supported "the territorial integrity of a unified Syria, a federal entity within a unified Syria" and that the group, the Kurds in Syria working with them and the Free Syrian Army groups cooperating with them were "very effective against Daesh".

The PYD's desire to clear Daesh from the region was "really a fundamental principle to U.S. and also to Turkey", according the officials.

But as with the PKK, Turkey has designated the PYD a terror organization.

Ankara announced late last week that the U.S and coalition forces could use Turkish bases to deploy manned and unmanned aerial vehicles in the fight against Daesh.

Saying it was important to make a distinction between the PKK and the PYD, one official said the PKK was "the designated terrorist organization in Turkey that has in recent days launched strikes or attacks on Turkish police and soldiers", forcing the Turkish government to defend itself.

“The PYD has been the group operating in Syria," she said, adding that the Turkish government has made it clear that its actions were not directed against the PYD in Syria, but against the PKK.

"It’s important to be separating these two groups and these two sets of incidents," she stressed.

The depth, shape and modalities for the operation in the region was discussed with Turkey, according to one official who said operations would not involve Turkish or U.S. soldiers, but rather "moderate opposition groups on the ground that can maneuver" and those with which the coalition would coordinate to fight Daesh, as was done "across both Iraq and Syria in various instances over the last nine months with some success".

The issue of a no-fly zone was also raised, with officials saying the last stretch of international border with Turkey controlled by Daesh -- about 98 kilometers (60 miles) -- would not become such a zone.

Turkey recently launched airstrikes against Daesh and the PKK in Syria and Iraq. On Friday night and in the early hours of Saturday, Turkish jets bombed PKK camps in northern Iraq for the first time in the last two-and-a-half years. Turkish jets again hit PKK targets inside and outside Turkey on Sunday night and on Tuesday.

Meanwhile, Turkish police on Friday began operations across the country to find those with links to terror groups, including Daesh and the PKK.