The defense lawyer of Reza Zarrab, the shady Iranian-born Turkish businessman who was arrested in Miami in March for attempting to evade U.S. sanctions on Iran, has requested time from the court to respond to the claims concerning his client. 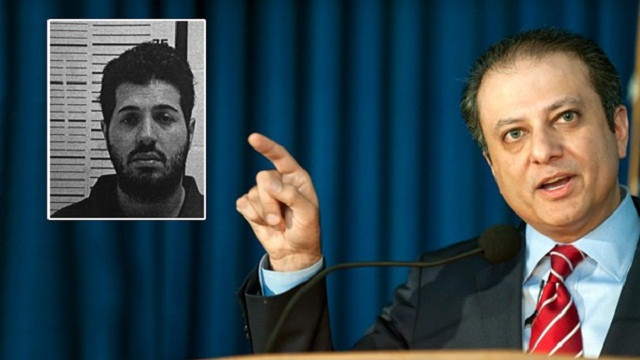 Nafiz Albayrak / New York, May 28 (DHA) - U.S. Attorney Preet Bharara on May 25 said Zarrab, 32, should not receive bail, citing the summary of proceedings of the investigation that was launched on Dec. 17, 2013 in Turkey, which targeted the government’s senior members.
“We will send additional information carrying critical significance regarding the issue,” said Zarrab’s lawyer Benjamin Brafman, adding that prosecutors opposed his client’s bail request with “wrong and flawed arguments.”
Brafman previously demanded that his client be granted house arrest on $50 million bail, $10 million of which would be in cash.
The defense lawyer requested until 12 p.m. on May 31 to respond to the accusations, adding that they do not want the bail hearing due on June 2 to be postponed.
Zarrab was accused of paying massive bribes to senior government figures in a scheme that allegedly involved the ministers in Turkey. The December 2013 corruption cases targeted figures close to the government and resulted in lasting enmity between the Justice and Development Party (AKP) government and the movement of Islamic scholar Fethullah Gülen, as prosecutors close to the movement were said to have launched the probe.
Bharara said Zarrab has “significant incentive and ability to flee” due to his substantial family and business contacts abroad, adding that he had passports from three countries enabling him to easily travel to countries from which he cannot be extradited.
“The defendant has used his tremendous wealth not only to purchase several homes, yachts, and other assets, but also to buy access to corrupt politicians in Turkey. Zarrab was arrested in Turkey in 2013 for bribing Turkish officials. He was released after the charges were dropped. The Turkish prosecutor and the police officers responsible for the investigation were either suspended or arrested,” said the objection presented by Bharara.
In his objection to Zarrab’s bail request, Bharara presented the English translation of the summary of proceedings of Turkey’s 2013 graft probe, Zarrab’s statements in a TV show on April 19, 2014, e-mail exchanges, and a news article on his donation worth $5 million to an association founded by Emine Erdoğan, the wife of President Recep Tayyip Erdoğan, the Social Development Center of Education and Social Solidarity Association (Togem-Der).
In his bail offer, Zarrab cited the donation, which he said proved that he is a “charitable businessman.”
Bhrara said he claimed that he had annual income of about $720,000, despite saying publicly on the TV show that he generates over $11 billion in annual exports, including about $3.5 billion in gold exports.
Photos of bars of gold, a gold-plated pistol, a yacht and a substantial amount of cash found in Zarrab’s phone were also presented by Bharara as evidence that his income statements were incorrect.