34th-richest of the world Saudi Prince in Turkey's resort town

Saudi Arabia’s Prince Alwaleed Bin Talal or the 34th-richest man of the world listed by Forbes, has wandered with his family in the streets of Marmaris, one of Turkey’s leading tourism attraction points. 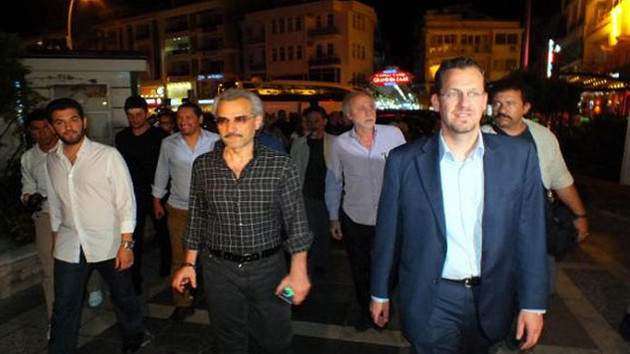 The Saudi Prince and his family came to Marmaris coast on a mega yacht named “Kingdom”, and then came to the city center by their bus, along with their security guards.

Tourists did not miss the moment where the Prince entered the marina and took pictures of the prince. Prince Alwaleed was highly sociable, responding to people’s attention and greeting the people that were waving their hands.

With his family of 20 people, the Prince have entered a café reserved for the visit of the billionair. The family have only ordered non-alcoholic beverages and water. The rumors spread after the visit, claiming that the Prince have left 5 thousand dollars on the bill, however the owners of the café did not make any statement on these stories.

The Prince and his family have left the Marmaris streets, after having wandered around and having had shopping in leather shops, jewellery stores and clothing stores in the city centre.

The sixty-year-old Saudi businessman had recently announced that he will donate his 32-billion-dollar fortune to charity organizations. Alwaleed does not occupy an official positions in the Saudi government, however he has stakes in giant companies such as the Twitter, Apple and Four Seasons.